WITH CHARGES PENDING AGAINST HIM, LEADER OF PANAMA'S SUPREME COURT INTERFERES WITH CORRUPTION CASES

In an order that makes absolutely no sense, José Ayú Prado, the President of the Supreme Court of Justice, in the Republic of Panama, has forbidden interested parties from reviewing the contents of court files, by prohibiting them from visiting the Court. Additionally, due to some nonsense about court overload, the order, which appears here, suspends the ongoing investigations into "supposed acts of corruption" at the Second Anti-Corruption Tribunal. 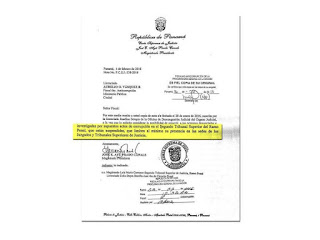 Notwithstanding that there are a number of pending cases against him, Ayú Prado, was recently reelected the leader of the highest court in Panama, which gives you an idea of the extent of the universal corruption of the members of the Court, whose members were appointed by the former, and currently indicted, president of Panama, Ricardo Martinelli. Some of the 150 victims of the Martinelli's illegal surveillance program have been extremely vocal about the slow pace of the investigation, which ultimately rests in the hands of Magistrate Judge Ayú Prado, which targeted Opposition leaders, including a former candidate for president.

With the people of Panama calling for removal of the entire bench of the Supreme Court of Justice, and most attorneys outside of Panama telling their clients that filing civil suits there is not only a waste of time, due to the rampant corruption, but exposes them to the risk that bogus criminal cases will be filed against them, as well as the illegal seizure, without due process, of any assets they have in the Republic, new foreign investment has seriously declined, and Country Risk will need to be reevaluated.