The Cayman Gang of Four, specifically ringleader Sharon Lexa Lamb, and Fernando Moto Mendes, took the letterhead stationary of the closed Dundee Merchant Bank, where Lamb had been previously fired, and manufactured documents that purported to be transmittal letters, sending client money, without their authorization and consent, to B & C Capital, Ltd., controlled by Gang member Ryan Bateman, Mendes, and Lamb.

Dundee Merchant Bank held only a Class "B" banking license, which required it be the subsidiary of an international, full-service financial institution, and Dundee Bank of Canada had been sold by Dundee Corporation. A Canadian regulator reportedly ordered the bank closed, but no official liquidation has ever been filed. The bank simply closed its doors, and Lamb & Mendes then used its documents to perpetrate one of the biggest frauds seen in the Cayman Islands, answering the old bank telephone number, which she had taken, under the name of "Dundee Leeds," another closed and sold off dundee company. Dundee Bank, Lamb's co-defendant in a major Cayman Islands civil case, has stated that none of her actions were authorized by the bank, as she had been terminated two years prior. 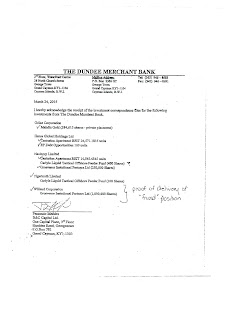 Fernando Moto Mendes has claimed that he has only a minor role at B & C, Bateman & Company, and Bateman Capital, but he signed these bogus documents as "General Manager, " the functional equivalent of Managing Director; He has been seen in Grand Cayman.

Lamb is said to have evaded questioning, by the Royal Cayman Islands Police Service, and an American law enforcement agency investigating the $450m fraud, by hiding out in the Republic of Cuba, and emails from her aliases confirm that she is in the Atlantic Time Zone. Bateman is missing, and has been tracked to Panama ; Derek Buntain is in hiding in Canada.