BOGUS COPIES OF NEW YORK TIMES, WITH DISINFORMATION, DISTRIBUTED ON THE STREETS OF NEW YORK

It seems that one can no longer trust what appears to be the real thing in the media. New Yorkers have reported that counterfeit copies of a New York Time "supplement" have been distributed in the city. Purporting to be a special section dealing with the Israeli-Arab issue, it was reportedly produced by a pro-Palestinian group, and contains slanted content that is not objective reporting.

Internet and Twitter versions of this attempt to disseminate this disinformation have been removed from the Web, but it does confirm the existence of so-called "black" propaganda, which compliance officers should always be alert to; skim milk masquerading as cream, to quote Gilbert & Sullivan. Verify information before relying upon it, in a due diligence investigation, lest you get burned.


Here is a screenshot of a page from the bogus version of the Times: 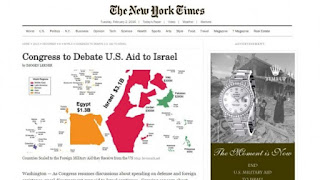 Note how is it complete with what appears to be authentic adverts. Alert readers, however, know that newspapers like the Times rarely place ads that dominate the first page.