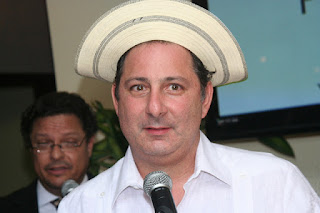 Salomón Shamah, the former Panamanian Minister of Tourism, under the former government of Ricardo Martinelli, is reportedly directing the operation who goal is the resignation of the Varela administration, or failing that, initiating a coup d'etat in Panama. While Shamah has avoid entering Panama of late, his wife is said to be serving as his emissary to factions within the country, seeking support among the power elite. He is one of the leaders of the movement to unseat Varela, and replace him with Martinelli.

The people of the Republic of Panama, sick of official corruption, and seeing that the much-anticipated reform movement of Varela has failed to make any significant progress, since taking office, are being bombarded with calls for his resignation. This movement is reportedly led by Panama's powerful Syrian Organized Crime Syndicate (whose less politically correct description is the Sephardic Group), who wish to dismantle the current leadership, under the guise of replacing a failed administration. In truth and in fact,  the plotters wish to enthrone a Martinelli-led coalition, which will unfortunately, place Panama back into a system featuring massive, systemic corruption.

Shamah, a Colombian national who holds Panamanian citizenship, whose prior involvement in drug smuggling and arms trafficking, let alone ties to David Murcia/DMG, caused his US visa to be revoked, is rumored to have been engaged in money laundering of narcotics profits, of close ties to Ricardo Martinelli, and of engaging in official corruption while in office. He is known to be commanding the extralegal efforts to remove President Varela.
Posted by Kenneth Rijock at Friday, February 12, 2016