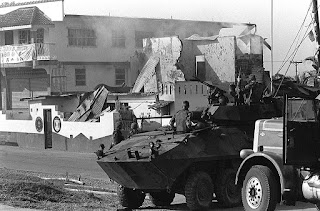 The reappearance of a number of powerful Panamanians*, who are known supporters of disgraced (and indicted) former President Ricardo Martinelli, and the recurring rumors, to the effect that they intend to remove the current reform president, Juan Carlos Varela Rodriguez, through a coup, has spread unease throughput Panama City. Martinelli, presently living in Miami, by virtue some non-public back-room arrangement. with an unnamed American law enforcement agency, has made no bones about his desire to return to power, through any means necessary. The reform process in Panama has frightened the country's powerful organized crime syndicate, whose best patron has always been Martinelli; they are supporting Varela's departure.

The upshot of this is a growing reluctance, on the part of foreign investors, to bring their capital into Panama at this time. The perceived risk levels, already greatly increased due to the massive corruption cases pending in Panama, since Martinelli's departure, are now so high that new money is looking elsewhere in the Caribbean for placement.

As the economy contracts in Panama, capital flight is inevitable, notwithstanding the government's efforts to tax, control, and curtail, it. This new uncertainty is sure to raise Country Risk levels even higher than they are at this time. Whether Panama should be completely redlined for all banking, and investment purposes, is a matter for individual assessment, but there is a well-founded fear that the situation will further deteriorate.
_______________________________________________________________
*The coup d'etat plot is being led by former Minister for Tourism, Salomón Shamah, whose US visa was reportedly revoked years ago for his involvement in Colombian drug trafficking.