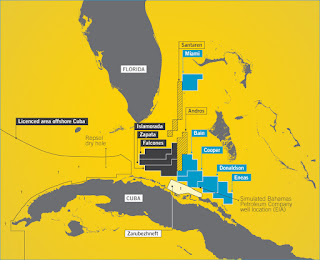 Questions persist about whether the $720,000, paid to the Government of the Bahamas, to begin the application process for oil exploration licenses, by a corporate entity controlled by the fugitive financier Ryan Bateman, of the Cayman Gang of Four, were the proceeds of criminal activities of Mr. Bateman, whose dodgy career reaches back several years, to his first venture in his native Alberta.

The Opposition in Nassau has posed some tough questions to government, about Bateman and his background, and unfortunately received no satisfactory answers. Given that Bateman absconded from a case in the Cayman Islands, where his bond was estreated, and that he is one of the primary suspects in the theft of $450m,  brazenly taken from the accounts of Canadian & American retirees, one wonders whether the money blinded government officials in Nassau to the need to conduct a due diligence investigation of Ryan Bateman.

Some sources, with knowledge of Bateman's "colorful" record of fraudulent ventures, have asserted that all his liquid assets were criminal proceeds, and can be traced back to victims who relied upon his integrity, with their investment capital. Whether the Bahamian oil exploration lease  agreements, or application fees, can be seized, or attached, by victims, or their attorneys, or by foreign prosecutors or attorneys general, is a distinct possibility; such actions could have a serious effect upon how the Bahamas conducts foreign investment in the future.