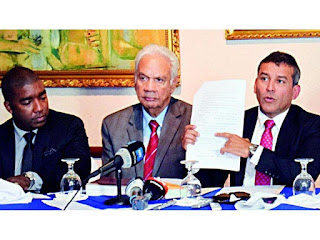 Just as OJ Simpson created a "Dream Team" of criminal defense lawyers, to represent him in his murder case, the fugitive former president of the Republic of Panama, Ricardo Martinelli, has assembled a trio of seasoned attorneys, to try to keep the criminal justice system of Panama from achieving his extradition, on more than a dozen serious charges. Thus far, however, their track record has been spotty; two attempts to interpose habeas corpus, relying upon his (illegal) appointment to the Central American Parliament, have now reportedly failed.

It appears now that the backup strategy is to petition the Inter-American Court of Human Rights, on their client's behalf, alleging that the rush to extradite him is a violation of his basic human rights, asserting that neither due process, nor the rule of law, has been followed in the Martinelli cases. The lawyers in the forefront of Martinelli's defense are Sidney Sittón, Rogelio Cruz, and Leonardo Paul.

While even the most despised criminal defendant is entitled to the best attorney that he can secure, the repeated use of purely procedural, and extremely dilatory, tactics, does not endear these three prominent lawyers to the Panamanian public. Some of Martinelli's dirt will surely rub off on these esteemed lawyers, whose role in hindering prosecution of perhaps the most corrupt president Panama has even had (yes, he eclipses Noriega) will not be easily forgotten, for justice delayed indefinitely is justice denied.