A RUSSIAN IN DOMINICA GOVERNMENT ! SAY IT AIN'T SO, FRANCINE 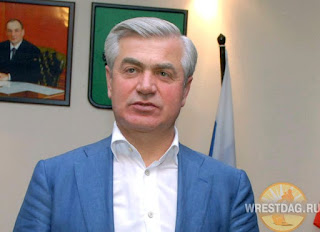 His name is Omar Murtuzaliev; he is the Vice President of the Russian Wrestling Federation and a close personal friend of Vladimir Putin. The press has described him as one of the Russian Oligarchs, businessmen who rapidly accumulated wealth in the years after the dissolution of the Soviet Union, when privatization of vast government assets was allegedly sold for peanuts, making many billionaires overnight.

What does this have to do with Dominica, you ask ? Murtuzaliev was the Trade Attache for the Commonwealth of Dominica, based at the High Commission in London,  between 2012 and 2014 when Francine Baron, the present Minister of Foreign Affairs, was the High Commissioner. He even listed his nationality and residence as Dominica, though he is known to reside in the Principality of Monaco. Why does a Russian national, who lives elsewhere, become Trade Attache for Dominica in London, and how can he discharge his "trade attache'"duties ?  How much trade did he actually facilitate during his term as attache, anyway ?

It seems his son, Timur Murtuzaliev, who is a British national, resides in the UK. Omar's Dominican passport gives him visa-free entry to Great Britain. Both Timur and Omar are directors of the Tiko Foundation, a tax-exempt charity, listed as delinquent in its financial filings, and formerly known as the Red Lodge Trust, formed the same year that Francine Baron was appointed High Commissioner in London, 2012. Connect the dots, please. If the UK Government makes it difficult for Russians to get visas, try a Dominica passport, my Russian friends; it is the Nature Island, and a Commonwealth member.

A final note; it was Minister Baron who signed the bilateral Dominica-Russia agreement at Sochi. How much influence does Russia have in Dominica Government ?