PRIME MINISTER OF DOMINICA UNDER CRIMINAL INVESTIGATION IN UNITED STATES 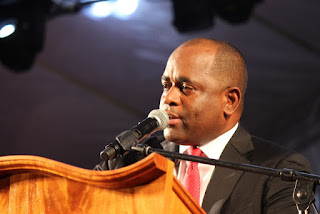 Reliable sources have confirmed that the Prime Minister of the Commonwealth, Roosevelt Skerrit, is currently under investigation, being conducted by an agency of the United States, for his role in the sale of a Dominican diplomatic passport to Alireza Zabahalat Monfared, an Iranian national who was recently returned to Iran, where he faces criminal prosecution for the embezzlement of billions of dollars in state funds. The investigation is said to be into Skerrit's actions, in facilitating the delivery of a diplomatic passport to a known international sanctions violator, Monfared, who was a part of a massive $400m Iran oil-for-gold sanctions evasion operation, involving his alleged partners, Babak Zanjani, and Reza Zarrab; Zarrab is awaiting trial in US District Court in New York,

Whether Skerrit will be later be named as a co-conspirator in the Iran sanctions case cannot be determined at this time, but considering the zeal with which the United States Department of Justice is conducting that case, and given the amount of money the Zarrab organization earned, for selling Iranian oil, in violation of international, and American, sanctions, he could face a very, very long prison sentence. Obviously, Skerrit failed to conduct his own due diligence, or he would have learned that Monfared was operating in very dangerous waters, against the worlds most powerful adversary.

Two of Skerrit's attorneys were reportedly deeply involved in the widespread sale of diplomatic passports, but no information is available, at this time, on whether they are a part of this investigation, but due to the fact that they are either going to be co-defendants, or witnesses, they can no longer represent their client, due to a conflict of interest. They may also want to research US law on the Crime or Fraud Exception to the attorney-client privilege.

Monfared's illegal activities were common knowledge, in the compliance industry, long before he applied for, and received, a diplomatic Dominican passport, and whether Skerrit exercised undue influence, in the approval and issuance of the passport to Monfared, will most likely be a part of the investigation he and Skerrit reportedly had a close personal relationship, as evidenced by Skerrit's visit to Monfared in Malaysia, where the Iranian national operated what is alleged to be a front company, used to conceal his criminal conduct.

Additionally, the award of a diplomatic passport to Monfared violated several provisions of the 1961 Vienna Convention on Diplomatic Relations, and Skerrit's act of issuing the passport, when he knew, or should have known, that it violated an international agreement which Dominica is bound by, increases his culpability. If he is indicted, he will be forced to resign as Prime Minister of Dominica.