AN ANGRY PANAMA BURNS US AMBASSADOR IN EFFIGY 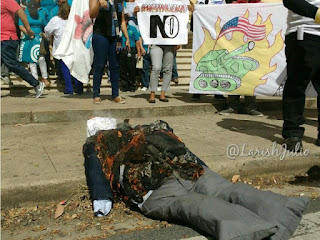 Panamanians, facing a perfect storm of problems, with the Panama papers, the Waked scandal, and the Financial Pacific/Petaquilla Gold Mine insider trading case, have responded with an action straight out of the 1960s: a life-size doll, made up to look like the  American Ambassador John Feeley was burned in effigy in Panama City. The event took place during a patriotic parade, commemorating a national holiday, Martyrs' Day, during which riots protesting the Canal Zone occurred.

Observers of the Panama political scene believe that the return to nationalism is a knee-jerk reaction to Panama's many troubles, which include the utter failure of the current government, elected on a reform platform, to implement an effective program to combat the rampant corruption the country suffers from. They also note that anti-Americanism boils just below the surface on the Panama City street, some of which manifests itself in the targeting of American expats by financial criminals, and the inability of aggrieved American businessman to obtain any justice in Panama's notoriously ineffective and bribe-centered court system.

The trio of problems listed above has resulted in a marked decrease in the amount of new business coming into Panama, and is perceived, wrongly, as American in origin, partly because of the effects of the massive OFAC sanctions imposed against the Waked organization, upon money laundering grounds. Country Risk for Panama continues to increase, and as the clear and present dangers of potential financial loss to foreign investors, and possible entanglement in Panama's corruption or criminal enterprises drives away foreign money, there exists the distinct possibility that the country will further deteriorate in 2017. 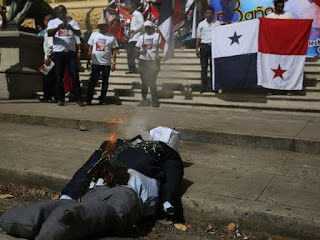