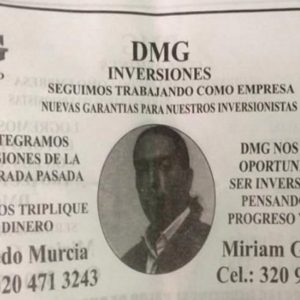 If you know the story about David Helmut Eduardo Murcia Guzmán's Massive Colombian Ponzi scheme, commonly known by the name of his former  company, DMG, you know that millions of victims lost their savings, by investing their money, and their dreams, in the fraud. now, years later, individuals who claim to be relatives of the scammer have reportedly reopened DMG, and people have already starting losing money to the scheme's latest incarnation, trading upon the name of the man whom many call the Colombian Bernie Madoff.

Colombian media has noted that marketers are again claiming that investors will double their money the same day, but losses are already mounting up, as those bogus promises again fall flat. Unfortunately, Murcia is still lionized in Colombia, partly because early investors did actually make a profit, although it was at the expense of those who followed.

We can only hope that Colombian authorities act swiftly to shut down the latest version of this bogus investment scheme, and this time arrest, convict and imprison, those responsible for reanimating this fraud, in a modern form.
Posted by Kenneth Rijock at Friday, January 13, 2017