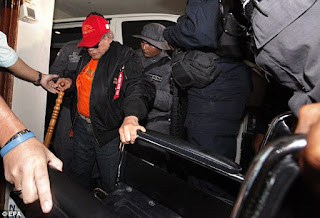 Panama's former dictator, General Manuel Noriega, has been released from El Renacer Prison, where he has been serving a 60-years sentence, for multiple crimes including murder, in order that he undergo brain surgery on February 15. Noriega, who served 17 years in a US prison, for drug smuggling & money laundering, and thereafter still more time in France, where he was convicted of money laundering, will be assessed post-procedure, to determine whether he can resume serving his sentence. Panamanian law allows for home confinement for those who are elderly or infirm, and Noriega is 82 years old.

At present, Noriega is reportedly staying at his daughter's apartment in a Panama City suburb. The extent of his brain tumor is not known.
Posted by Kenneth Rijock at Sunday, January 29, 2017