In a bold move obviously designed to avoid any action by the US Department of Justice,  the Islamic Republic of Iran has reportedly caused INTERPOL agents to detain one of Reza Zarrab's reputed partners, in the Dominican Republic, and to transport him, in a circuitous route, back to Iran, where he is wanted, for embezzling billions of dollars, during Zarrab & Zanjani's massive Iran sanctions evasion operation. It is doubted whether any of the legal requirements of extradition were observed by Iran, which will most likely be ignored by the Iranian courts, who could impose the death penalty in this case, as they have already done with Babak Morteza Zanjani, a co-defendant. Unless $3bn is returned, Babak will be executed, according to Iranian government statements.

The individual taken is Alireza Zibahalat Monfared, an Iranian national who holds a diplomatic passport from Dominica, which he reportedly purchased for $2m, through a personal relationship the country's Prime Minister, Roosevelt Skerrit, a fact which will certainly reopen the ongoing controversy over dodgy foreigners buying diplomatic status in Dominica, at an obscenely high cost, the proceeds of a portion of which seem to have been diverted from the national treasury, and ended up in the accounts of corrupt officials.


There is almost a Cold War feeling to his capture, according to Dom Rep sources; he was transported to Havana (no specific details available), and thereafter to Moscow, which was the favored route of the old Soviet Union before it fell, around 1991. From Russia, he was shipped off to Iran. Monfared had been living a life of luxury in the Dominican Republic prior to his "arrest," the legitimacy of which appear to be in question.

So, why the unusual route back to Iran ? Remember that the US arrested Reza Zarrab, when he arrived in Miami, on a planned family vacation to Disney World. It is not only possible that the Department of Justice would want to detain, and question, Monfared, there is a strong possibility that he has a sealed indictment waiting for him, should he pass through or even over, the United States, or any of its territories or possessions. Going through Cuba was an effective way of evading the long arm of American justice, in transporting the fugitive. The fact that Monfared was even captured by Iran has not appeared in mainstream US media may mean that the fact he is not in American custody is an embarrassment for the Department of Justice, given where he was living at the time of his detention. 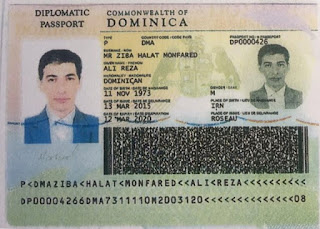 Monfared operated at least part of the time in Malaysia, which has been reported on this blog, as a hotbed of Iran sanctions evasion activity; Iran controls a number of financial institutions in that Southest Asian country, and it is definitely not a friend of the United States, as evidenced by its voting record in the United Nations.

It is not known whether the circumstances of Alireza Monfared's Iranian case will have any effect upon the upcoming Reza Zarrab trial, but hopefully, some previously nonpublic details will now leak out from Iran, to give those who wish to learn a more complete picture of the Zarrab/Zanjani illicit oil & gold sanctions evasion operation. Additionally, those who have been extremely critical of the corrupt operation of Caribbean economic passport programs, especially the bogus diplomatic passport aspect, will again call for their abolition, or at the very least, for training a compliance microscope on ALL Caribbean nationals who come from the jurisdictions where citizenship can be bought, no questions asked. 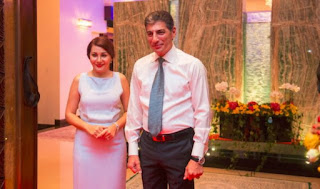