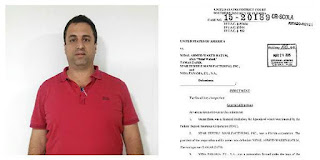 Nidal Ahmed Waked Hatum, accused of operating a global money laundering enterprise that cleaned Colombian and Mexican narcotics profits, was extradited to the United States this week, from Colombia, where he had been detained upon arrival several months ago. Waked's arrest caused a furor in Panama, where his family owns several large businesses, which employ thousands, who feared loss of jobs, and the possible shutdown of a bank, and a major newspaper.

Waked was charged, in a previously sealed Federal Indictment issued in the Southern District of Florida in 2015, with two counts of Money Laundering Conspiracy, and Bank Fraud, and there are Forfeiture allegations. He faces a possible maximum sentence of 70 years in Federal Prison, though the unknown amount laundered, which could be in the hundreds of millions. over two decades, could result in a Life Sentence, in a system where there is no parole.

The Waked money laundering operation was known to the Government of Panama for at least a decade, but due to the close cooperation, between local law enforcement and the criminal syndicates, no charges were ever brought. In truth and in fact, in 2008, a financial crime analyst turned over his detailed report on the money laundering activities of the Wakeds, and a copy was provided to the office of the Attorney General of Panama. The report was, amazingly enough, turned over to the Wakeds by government organized crime attorney José Ayú Prado Canals, who was then in the Fiscal's office, and who is now the president of the Supreme Court of Justice of Panama. The analyst was identified by Prado, and forced to flee Panama for his own personal safety; Ayú Prado remains in office, notwithstanding multiple allegations of his links to career criminals like the Wakeds.

The Waked's legitimate business empire, 68 companies, was allegedly used to launder narco-profits, and for that reason, all the principal businesses have had OFAC sanctions placed against them; some have been issued limited exemption licenses, which permit them to continue to operate, but Panamanians are apprehensive about the future of those companies, which are central to the Panamanian economy, and which include a  luxury shopping mall, and duty-free stores at Tocumen International Airport.

Some Panamanians, in line with the new anti-American posture seen in public lately, accuse the United States of harming the legitimate economy of the country, through the sanctions surrounding the Waked case. OFAC sanctions re commonly known, in Latin America, as the Clinton List, due to the fact that it began during the administration of US President Bill Clinton.

Waked has not yet been arraigned in US District Court in Miami, according to a search of the court docket.