The Superintendent of Banking in the Republic of Panama (SBP) has published a list of local financial institutions that have been subject to civil fines & penalties, in 2015 and 2016. Reportedly, there are fines and sanctions imposed quarterly, but this critical information was never made public, and the Superintendent of Banking has now chosen to release the names and the offense details, over the objection of senior officials in Panama City, who apparently fear that the negative news will impact the economy.  We also understand that future fines will be made public in a timely manner.

Here are the details of the fines imposed, and the reasons therefor: 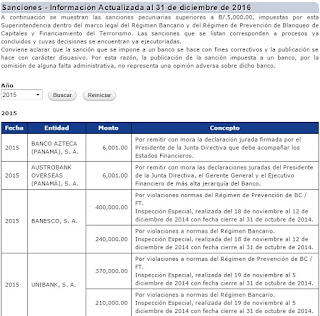 * Readers please note that SBP records also show a St Georges Bank, and there is confusion over the similar names; is this the same, or another licensed bank ? The records do not so indicate.
Posted by Kenneth Rijock at Saturday, January 07, 2017