WHY DID THE US NOT DISCLOSE THAT MULLAH OMAR DIED TWO YEARS AGO ?

The announcement today, from official Pakistani  sources, that the leader of the Taliban, Mullah Omar, died two years ago, in a hospital in Karachi, Pakistan, is yet another reminder that the United States routinely  classifies, and withholds, information that the compliance industry could use to reduce risk levels in international financial transactions that could provide material support to terrorist organizations.

Did the US Government fail to release the new of Omar's death in 2013, because it confirmed that certain interests (ISI?) in Pakistan not only cooperated with the Taliban, but gave its leadership safe haven in their country. When coupled with the fact that Osama bin Ladin was also living in Pakistan when he was killed, a picture emerges of Pakistani complicity with terrorist organizations, which raises that nation's Country Risk exponentially, and also is critical of American support for a regime that is often supporting our enemies in the war against terrorism. No wonder the State Department wanted that information classified and hidden from view.

Compliance officers, if armed in 2013 with the circumstances of Omar's death, would most certainly has governed themselves accordingly, and initiated enhanced due diligence upon most, if not all, wire transfers to, and other financial transaction with, Pakistan, based upon the well-founded fear that transfers could be terrorist financing. One wonders how many suspect transfers to Pakistan, that would have been stopped, went through, due to a lack of knowledge on the part of US-based compliance officers whose bank customers sent money to Pakistan.

When important information is classified for purely political reasons, it is those from whom the information is being kept from that generally suffer; think about that. 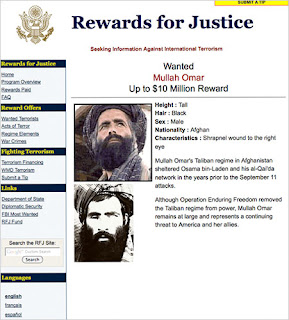