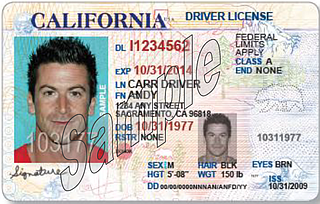 Unless you live or work in California. you probably do not know that, effective on January 1st, the State of California has been issuing driver's licenses to illegal aliens. The purposes of this new policy are to promote highway safety and insure that drivers have insurance.

Unfortunately, the ability to obtain a valid driver's license could facilitate bulk cash smuggling into Mexico, as well as money laundering operations. Mexican laundrymen can now easily assist their bulk cash couriers to obtain sufficient documentary proof to qualify for a California license, as Mexican passports, and those notorious consular IDs, are acceptable to the state's license issuing agency.

A smart money launderer, working for a Mexican cartel that is repatriating US-earned drug profits, will see that his couriers are suitably armed with the new California license, which will give them more credibility, during a law enforcement traffic stop. I wonder if the legislature in California thought of this before passing the law, known as AB 60 ?

Granted, the license is specifically not valid for any Federal use, such as boarding an airliner, or visiting Federal facilities or offices, or with Federal law enforcement agencies, and it does prominently bear a warning, "Federal limits apply," on the front (which may be misinterpreted by non-law enforcement individuals), and "Not acceptable for Official Federal Purposes, " on the reverse. Unfortunately, most people do not look at the back of a driver's license when it is presented to them, or when they only have made a copy of the front.

It may not be accepted by out-of-state police officers at a traffic stop, but there has not been any reported incident where it was treated as such, though there have been warnings issued to drivers by consumer advocates.

If you are a compliance officer at a bank, and your new customer's license contains the warnings listed above (see the sample at the beginning of the article), you should take that information into account when assessing the risk levels of the customer. While the vast majority of the 399,000 illegal aliens who have been issued that type of license since January are law-abiding, your new bank client could be engaged in money laundering and/or bulk cash smuggling, and his license was issued under an alias.

Outside of California, should you encounter this type of license at new accounts, you may want to consult with bank counsel for a determination in whether it will be accepted as sole identification, considering that the US Government will not take it, and whether enhanced due diligence should be applied to the applicant, as part of your CIP process.