ARE YOU BANKING DECEASED HAMAS TERRORISTS ? 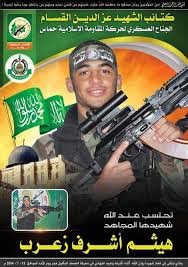 It seems that Hamas failed to disclose the names of a significant number of its terrorist fighters who were killed last year, during the conflict with Israel. While we know that it attempted to hide the fact that many of the dead were armed fighters who fought the Israeli Army in Gaza and inside Israel, and claimed that those who were killed were civilians, it has been accepted that a large segment of the dead were combatants.

Fifty of the dead Hamas fighters appear to have been deliberately omitted from casualty lists, and it may have been because some of them were commanders, thus constituting ranking officers, and others were the Hamas equivalent of special forces troops. Their identities, if publicly revealed, might confirm the true nature of Hamas' military infrastructure, and expose its disinformation about casualties.

Were any of the ranking officers killed in 2014 maintaining bank accounts outside the Palestinian Territories ? Given the nature of Hamas' activities, both in Europe, as well as in Africa, Asia & Latin America, it is entirely possible. Such individuals would have disguised their terrorist affiliation, and used passports obtained in Jordan, Egypt or Syria, to conceal their identities.

The morbid nature of Hamas' glorification of their dead has resulted in the proliferation of posters, photographs, and other media, depicting these deceased terrorists as heroes, and these images, together with their real names, and other information, have been collected, and can be accessed in the Appendix of the document that appears here*, which is a list of 50 individuals.