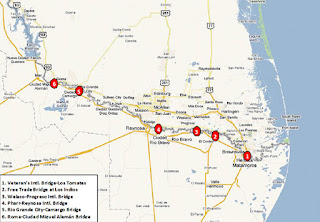 Jesus Roldan-Rubio*, a Mexican national who apparently was contracted to attempt to smuggle over $100,000, and a weapon & ammunition out of Laredo,Texas, was this week sentenced to fifteen months in Federal Prison, and three years of Supervised Release. He was detained after $109,350 was found, hidden in his automobile's battery; a .45 cal. handgun, and 100 rounds were also seized.