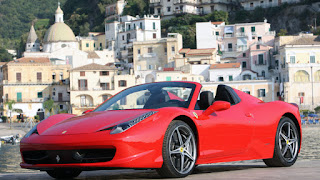 The Attorney General of Panama, through the Anti-Corruption Prosecutor's Office, has recently seized a number of luxury automobiles, many of which were purchased by the Colombian Pyramid/Ponzi schemer, David Eduardo Helmut Murcia Guzmán, and stolen by Panamanian businessmen who were investing his Ponzi and narcotics profits. We learned this from a source who sought to examine those vehicles, which were in storage at Chichaco Motorsports.

One of the cars, a  2006 Ferrari roadster, was "acquired" (read: stolen) by the expat Alaskan, Gary Lundgren, a/k/a Gary James Lundgren, and rumor has it that Lundgren had the engine removed, to foil potential car thieves. He isn't doing much driving, as he has barricaded himself inside his office, to deter any contact with his investors, who have complained that he has ceased making the required monthly interest payments, and want very badly to see him in person. After all, he promised to pay them all 8% per month, on their investments. Lundgren, who is under investigation by a number of US law enforcement agencies, and regulatory bodies, for the Financial Pacific insider trading scandal, as well as securities fraud, has not been seen in public in Panama for months.