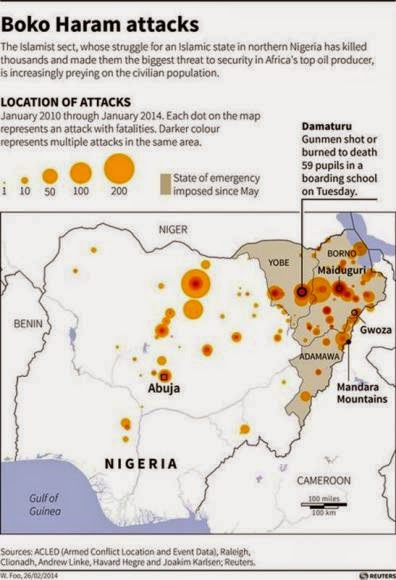 The utter failure of the corrupt Nigerian Army to defeat the armed forces of Boko Haram on the battlefield, where the Army's small arms are no match for crew-served BH firepower, is only half of the story. Massive oil and energy profits, apparently earned with the curious assistance of Western financial institutions, are said to fund the BH military machine, and its political allies, at the highest level in Nigeria, could ultimately result in the creation of a radical Islamist state in a breakaway northeastern Nigeria.

A leading Opposition presidential candidate, from the Peoples Democratic Party, General Muhammadu Buhari, who is an Islamist, has openly Supported Boko Haram. he has called on the government to grant them a general amnesty, rehabilitate them, and pay them, as it has done with other militant sects, he also has stated that any attack on Boko Haram is an attack on the people of Northern Nigeria, and that Government treatment of the radical sect is injust and unconstitutional.

Serious questions have arisen regarding Buhari's campaign funding, and funding for Boko Haram, allegedly originating from a locally-owned company known as Sahara Energy, whose links to Buhari, and his political allies, are well known. Sahara Energy's rapid rise has many Nigerians wondering whether it financially benefited from its close relationship with senior government figures tied to Buhari. Sahara also has enjoyed a special relationship with BNP Paribas, and been the beneficiary of extremely favorable credit lines and extensions of credit. Where does BNP Paribas figure in Nigerian internal politics, especially those who are BK supporters ?

It would appear that the Nigerian Army is unable to defeat Boko Haram, and Western military aid may be too little and too late. Will Nigeria end up split in into two parts, one Islamist, and one consisting of those parts of the country not conquered by Boko Haram ? It is impossible to say, but Country Risk levels for Nigeria are about to fly off the charts.