US FILES MOTION IN LIMINE IN THE ALI SADR CASE, TO ELIMINATE CONFUSING DEFENSE TACTICS AT TRIAL 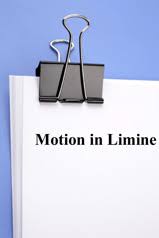 If you are one of those who is monitoring the Ali Sadr Hashemi Nejad Federal criminal case in New York, you probably know that the trial has been scheduled for March 2, 2020, and the District Judge presiding has indicated that there will be no further motions to postpone it. Hashemi Nejad's attorneys have conducted a zealous defense on his behalf to date, though it has not resulted in any favorable rulings from the Court.


The Government's Motion in Limine, which was recently filed, signals that prosecutors are seeking to exclude the introduction of irrelevant arguments that could confuse the jury, and divert them from acting as a Finder of Fact, when reaching a verdict. Additionally, the Government wants the Court to specifically allow evidence that it believes with clinch its case, free of any possible defense actions to interfere with its introduction at trial.

Here's a summary of the Government's motion, from its Memorandum of Law:

(1) Any evidence or argument that there are any benefits to the public from the Venezuelan project should be excluded.

(2) Any evidence or argument that the Defendant did not commit the charged bank fraud offenses, because of purported victim fault, or lack of harm to the victim banks, should be excluded.

(3) Any evidence or argument regarding the JCPOA should be excluded.

(4) Any examination of expert witnesses, affiliated with a non-profit policy institute.concerning the institute's donors, should be excluded.

Here is what they want the Court to let in:

(A)  Certain documents that are admitted for the non-hearsay purpose of extablishing the Defendant's knowlege of US sanctions.

(B) Statement and documents from co-conspirators, in furtherance of the charges conspiracies.

(C) Evidence about the process of obtaining CBI citizenship in the Federation of St. Kitts & Nevis should be admitted.

Observers in Malta where Hashemi Nejad's Pilatus Bank was licensed, expect that the trial was expose even more of the dark and corrupt relationship between the bank and senior government leaders.