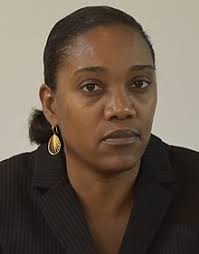 This is Dominican Minister of Foreign Affairs Francine Baron, a career politician, and the daughter of a former politician. She is the self-appointed guardian of Dominica's list of foreign holders of Dominica Diplomatic passports, what some have called "The List of the Damned," as it reportedly includes Iranian government officials, Russian organized crime members, and assorted career white collar criminals. Many have since been arrested, convicted and imprisoned for their crimes.

Minister Baron has zealously kept the identities of hundreds of diplomatic passport holders from the people of Dominica, arrogantly stating in public:

"It [the Government of Dominica] remains opposed to the idea of divulging the
information on all appointees in a forum that is essentially public in nature, and
to which the entire world has access."

The public cannot know who their diplomats are ? Dominica has only a handful of bona fide diplomats, and they maintain only a small number of embassies and missions. So where in the world do all the hundreds of "other diplomats" serve, Ms. Baron ?  How much cash was paid in, literally under the table, to facilitate the issuance of diplomatic passports by the Ministry of Foreign Affairs, and to whom ? We cannot say, but the citizens of the Commonwealth of Dominica deserve to see who their "diplomats" are, minister. You serve the people, not the Prime Minister and the Labour Party.