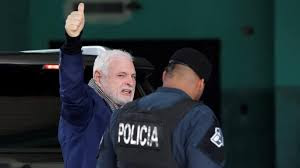 Eduardo Ulloa, the Attorney General of the Republic of Panama has concluded that the country's disgraced former president, Ricardo Martinelli Berrocal, can face the multiple criminal cases pending against him. Martinelli has been charged with corruption, money laundering, embezzlement, and stock manipulation.

The issue arose due to the fact that the Doctrine of Speciality, which governs extradition, prohibits an extradited defendant from being tried for any charge other than the specific crimes he was originally extradited for. The AG applied for, and received, an opinion from the US State Department Office of Foreign Affairs. Thomas Heinemann, a Counselor at State, in a written opinion received by the Ministry of Foreign Affairs,, noted:

(1) Since Martinelli was acquitted on the charges he was extradited for, he has been free to travel outside Panama since September 15, 2019. He has remained in the country.

(2) Therefore, the Doctrine of Specialty does not apply. He may stand trial on the other pending cases. 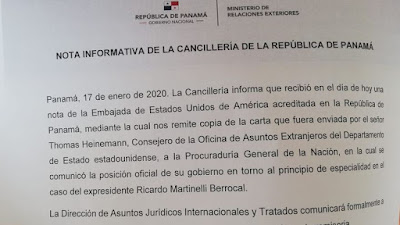 Martinelli was acquitted of illegal wiretapping of over 150 Panamanians and foreigners, on August 9, 2019. The matter has been appealed by government prosecutors.
Posted by Kenneth Rijock at Monday, January 20, 2020