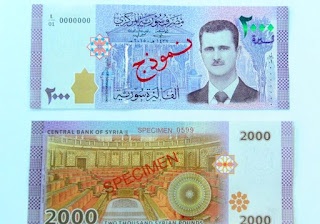 This is the new 200 Pound note issued by Syria, and reportedly placed into circulation yesterday. it is the first appearance of the country's current president on the currency. Being that it will only be in official circulation in those areas of Syria where Assad is in military control, if you subsequently see this note, in the possession of a bank client, given sanctions in place against Syria, you may want to make further inquiries. Is/was your bank client a PEP ?
Posted by Kenneth Rijock at Monday, July 03, 2017