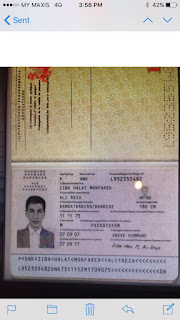 Two of the partners in the billion dollar scheme that artfully funneled sanctioned Iranian oil around global regulations prohibiting its sale, Babak Zanjani, and Alireza Monfared, are both in custody somewhere in Iran's warren of black prisons. Zanjani has been sentenced to death, for stealing billions, and Monfared, a suspected rogue Iranian intelligence officer, is detailed indefinitely, without trial; both are isolated from the world.

We know that both Iranians controlled a dodgy offshore bank, First Islamic Investment Bank, known to be OFAC-sanctioned, as is Zanjani; both also have another thing in common, which they obviously used, during the period in which they illegally moved Iranian oil. Both Zanjani and Monfared have bogus passports, credential that they employ to masquerade as citizens of Denmark . No, Denmark does not have a citizenship by investment program; these documents are fraudulent, though they do pass scrutiny. Who in Danish government was bribed to obtain official blank passport forms, and create the documents, I wonder, and how many Schengen Zone countries did they transact illicit business in, using those travel documents ?