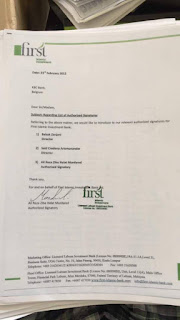 For those apologists from Dominica's government, who still insist that Alireza Monfared was properly vetted before being given both a Dominica CBI citizenship, and a diplomatic passport, take a look at these documents. He was an officer of the First Islamic Investment Bank Ltd.*, sanctioned by OFAC years before Monfared  ever sought a Dominica nationality, and diplomatic passport. The correspondence identifies him as an "authorized signatory" of the bank.

Did I mention that another senior bank officer, and bank owner, is Babak Zanjani, Monfared's partner, who, along with Reza Zarrab, ran Iran's massive oil-for-gold sanctions evasion program, out of Labuan, Malaysia's prime offshore tax haven ? Look again at the documents, and check out the date. Zanjani has been sentenced to death in Iran; Zarrab is looking at 75 years in a Federal Prison. 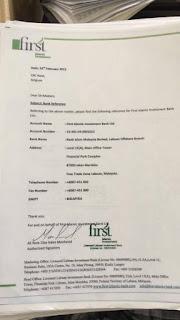 This totally and completely destroys any claim that Monfared's dark past was not easily accessible. If I was a betting man, I would venture a guess that the due diligence firm, engaged by Dominica, found it, but certain greedy Dominica Government officials ignored it, and took Monfared's cash, thinking that they are immune from prosecution. Perhaps someone might want to explain who Joon Kim, the US Attorney for the Southern District of New York is, and that the Money Laundering Control Act confers extraterritorial jurisdiction.
_______________________________________________________________
* Labuan IBFC records show that the First Islamic Investment Bank lost its charter on July 18, 2014.
Posted by Kenneth Rijock at Tuesday, July 18, 2017