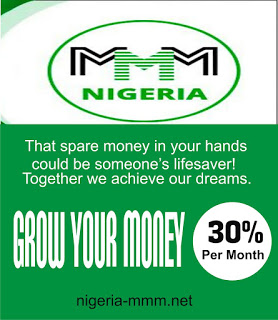 If you are familiar with the host of advance fee schemes perpetrated upon Internet victims in Western Europe & North America by Nigerian career criminals, you might be interested in this story. Many of those same Nigerians are now themselves being willingly defrauded by a Ponzi/pyramid scheme that makes no bones about how it operates, and it is an abject lesson in pure unmitigated greed.

the scheme is called MMM, for Mavrodi Mondial Moneybox, oddly enough named for the Russian career criminal who reportedly set it up in the 1980s. It promises a 30% return, in one month, with the money to come from the next player, who pays the older participant directly. It makes no apologies about its status as a criminal Ponzi scheme, but its success in Nigeria is said to be due to rampant unemployment, and a victim population that does not care about the fact that it is illegal; they just want to get paid.

Obviously, there are many, many victims, for if someone breaks the chain, after being paid, the next player loses everything he or she "invested." African media reports that there are an estimated 2.4m Nigerians playing this game. One wonder just how many end up without the promised payout, but others, having been paid that thirty per cent return, are now reinvesting, multiple times.

MMM reflects poorly upon both the lack of respect for the law exhibited by the Nigerian players, as well as the poor sate of the economy, though unemployments never justifies crime. One wonders jus how many Nigerian white-collar criminals, having fleeced Westerners with their phony advance fee schemes, have now themselves become victims of a local scam; Call it karma.
Posted by Kenneth Rijock at Friday, November 25, 2016