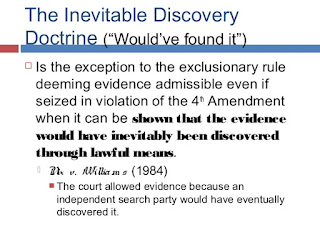 We have previously discussed the ongoing dispute, in the pending Federal Iran sanctions violation case against the Iranian golf trader, Reza Zarrab, where the defense has cited relevant case law limiting the right to obtain email information, from a server located outside the United States, and is seeking to exclude emails from a foreign-based Internet service provider, through a motion to suppress.

Though the Government is asserting that its position, regarding the admissibility of those emails, is correct, it has notified the defense that, if necessary, it intends to offer testimony in support of a fall-back position, that the emails would have been obtained, in any event, by subsequent investigation, and therefore they should be admitted, pursuant to the Doctrine of Inevitable Discovery. This rule, established by appellate case law, provides that, if the excluded evidence would have been discovered anyway, in the course of the ongoing investigation, through other means, the Court will allow it to be admitted.

This means that the Government announced its readiness to put on the testimony of Federal law enforcement agents, probably the lead agency, the FBI, regarding their ongoing investigation into the Zarrab case. Should the Government meet its burden, and demonstrate that the Bureau would have, eventually, obtained access to the foreign-based emails, the Court could allow emails, obtained through the defendant's smart phone, after obtaining the password from him, without a Miranda warning, into evidence.