WILL CHINESE AGENTS EXPOSE THE CORRUPT PEP WHO IS ONE OF YOUR BANK CUSTOMERS ? 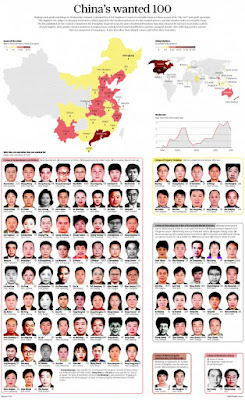 The United States Government has reportedly warned China that its undercover agents are not welcome in America. China, which has been seeking the return of a large number of its nationals, wanted for corruption, money laundering, criminal activity, and the possession of sensitive information, many of whom have sought refuge in the United States. There are Federal criminal penalties for anyone who is an Unregistered Agent of a foreign nation.

Some of the Chinese agents have physically threatened those who fled China for America, or have stated that their relatives will be harmed or imprisoned, if they fail to return to China voluntarily. The United States and China have no extradition treaty, but there is some level of cooperation; China reportedly wants forty high-profile fugitives living in America.

How is this relevant to you, as a compliance officer at an international bank ? if your management has overruled your recommendations, and accepted high net-worth Chinese emigres as clients, you may have a well-heeled fugitive on your hands. If intelligence agents from China, tracking a target, find him in your city, and banking with you, the resultant publicity generated when media cover the story may not be the way in which you wish your bank to be portrayed. You are banking a corrupt Chinese PEP, or career criminal, they say ? Not good for your bank's image.

It is prudent for your compliance staff to revisit any bank clients who could possibly be wanted by the Chinese government; they will have sizable accounts, not be engaged in any occupation, and possibly be former Politically Exposed Persons (PEPs) in China. You do not want to be identified as the American bank of a Chinese criminal in the press.