Amado Arjona Duque, the attorney named recently as a central player in what is described as a ten million dollar extortion, perpetrated upon a businessmen who wanted a lucrative government contract in the PAN scandal, is no stranger to controversy. Amado was linked to the convicted colombian billion dollar Ponzi schemer, David Helmut Eduardo Murcia Guzmán.

Allegations that attorney Amado was involved in the "commission" for  "professional services,' on behalf of his client, who allegedly was acting for the recipient of the kickback, Panamanian President Ricardo Martinelli, who employed the intermediary, seem to be verified by reference to the agreement, which appears below. 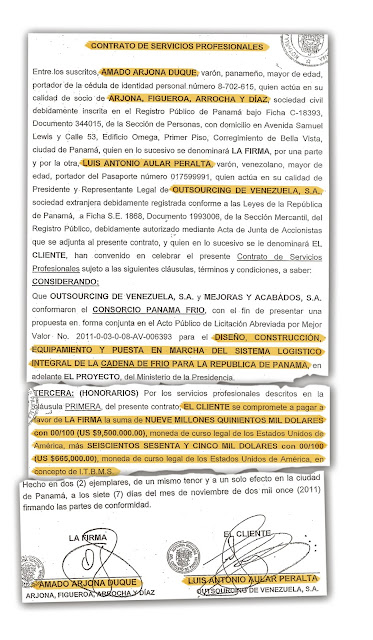 The questions remain: if Amado was a known associate of Murcia, whose fraud had al;ready been exposed, why didn't anyone object to his role in the PAN matter ? And what exactly did Amado do for Murcia ? Should Colombia, or the US, have charged Amado in their cases against Murcia ?
Posted by Kenneth Rijock at Tuesday, August 18, 2015