ADMITTING HAMAS AS AN OBSERVER TO THE UNITED NATIONS IS MADNESS

Rumors have been circulating, hinting that certain members of the United Nations want to propose to admit Hamas, the Specially Designated Global Terrorist organization, to the UN, as an Observer, with all the privileges that such status brings. This is absolute madness; the UN Charter specifically states that membership is for "peace-living" nations, and it provides for the suspension, and even expulsion, of any members who violate that cardinal rule.

Let me be clear; the time when a sanctioned terrorist group gain admittance to the United Nations, is the time when Western, democratic nations should rethink their financial contributions to that august body. The Hamas charter bluntly calls for the destruction of the State of Israel, and for that reason alone, its representatives are not qualified to sit in the same building as the legitimate members. If Hamas is admitted, will the United States cut off all funding, and ask the UN to relocate to Switzerland ?


Yes, I have heard the argument, that Hamas is the de facto ruler in Gaza, and to bring it in to the UN will cause it to reform. Well, even last week, Hamas was calling for Israel to be destroyed. There's no reform possible with radical Islamists, who find death to be their calling, and have never been interested in peace, on any terms. If the United Nations' members see fit to admit a terrorist organization to its ranks, then it has ceased to be a force for peace. 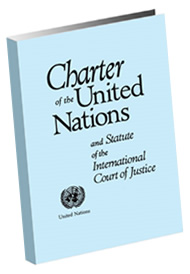