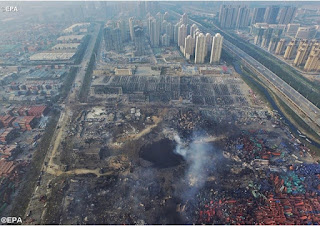 The two Chinese executives who were responsible for the warehouse disaster in Tianjin have been detailed by the authorities. Both are PEPs, one the son of the former local police chief, and other a former executive at a state-owned chemical company. They used their political connections to improperly obtain a license to operate a plant containing toxic chemicals, when it was illegal to have one so close to residential areas. The latest toll is 114 dead, and 674 injured, with more than 117,000 homes damages or destroyed.

Their method; disguise their corporate ownership. One PEP used his cousin to hold his stock, and the other employed a former school classmate for that purpose. Unless and until China puts a stop to this, compliance officers in Western banks must discount all shareholder information originating in China, when conducting due diligence, and enhanced due diligence, investigations, for customer identification programs. Frankly, you should regard ALL Chinese corporations as being owned by PEPs, until the client can conclusively prove otherwise; Yes, it is that bad.
Posted by Kenneth Rijock at Thursday, August 20, 2015