Turkish Airlines, which offers only minimal service to Latin America, and no flights to Central America, has announced that it will fly nonstop to Panama, thrice weekly, commencing in February. Turkey and Panama have no international trade to speak of, so why, of the 28 countries not served by the airline, is Turkish expanding Panama ?

This new service, said to anticipate employing Boeing B-777-300ER extended range airliners, will have serious implications in the area of terrorist financing. Turkey has become the international headquarters, and safe haven, for Hamas, the Specially Designated Global Terrorist (SDGT) organization, which located its operations to Istanbul, with the blessing of the country's president, who supports Hamas. In truth and in fact, the Hamas leader resident in Turkey, a terrorist with blood on his hands, and a dark past, is actively conducting Hamas operations in the West Bank (Judea & Samaria) against Israel, and Turkey shows signs that it is actually supporting Hamas.

Hamas will soon be able to move bulk cash, financial instruments, gold & precious gems, and even weapons and ammunition, from its financiers residing in Panama City, nonstop into Turkey. Panama's  corrupt government officials will do little to monitor the cargo upon outbound flights to Turkey, and will probably even assist in illicit export, assuming that the usual bribes are paid to them.

This news, coming on the heels that Emirates Airlines has also announced new service from the Middle East, nonstop to Panama,  means that financial service professionals assisting known terrorist groups, will now have a variety of ways to repatriate narco-profits, and to further facilitate funding themselves. Remember that Turkey's nationalist president recently called upon Muslims in the region to march on Jerusalem. He will not control Hamas, but assist it in its terrorist operations. 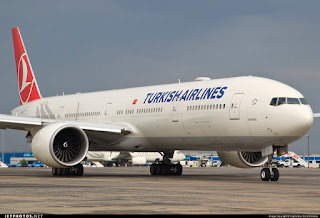 Do not look for the US and Canada to respond to this new terrorist financing challenge, for they employ their assets in Panama as a valuable listening post on Latin America, and do not want to damage their ability to do so, by rocking the boat. This means that bankers in the Western Hemisphere must now accept the fact that  money movement into Panama, through their financial institutions, now has an even greater chance of being used to purchase AK-47s for Hamas than before.