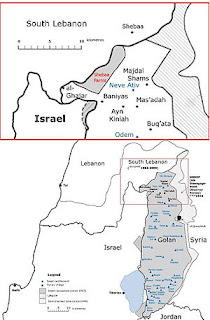 Lebanon, after an extended delay, due to an inability of its major political parties to come to an agreement, has now elected a new president. He is retired General Michel Aoun, who is the first pro-Hezbollah president, and who has immediately began making bellicose statement, which could bring the country, once again, to the brink of war.

Aoun, upon taking office, and in his first public speech, boasted that his country would recover what he referred to as "Occupied Lebanon," the Shebaa Farms region of Syria, which the United Nations has determined, repeatedly, after studying historical maps of the area, is not Lebanese territory, but is located within the Golan Heights, on the Syrian side of the established frontier, and annexed by Israel.

Hezbollah has continued to make this spurious claim, over Shebaa farms, since Israel withdrew from Lebanon, in 1980. There is no historical or legal basis for this claim, but Hezbollah has sought to inflame Lebanese sentiment, against Israel, since that withdrawal, by advancing this bogus claim.

The fear, among financial observers, is that Hezbollah will be encouraged to initiate a Third Lebanon War, and rain missiles down upon Israel, at which point the Israeli Air Force will, as promised, attack Lebanese infrastructure, country-wide, including the downtown Beirut financial center. This will disrupt financial transactions for months, if not years, after the end of hostilities, plunging Lebanon into a major depression.

Therefore, the last thing we want to see in Lebanon this week, is saber-rattling, by the country's new president, raising Country Risk levels.
Posted by Kenneth Rijock at Monday, October 31, 2016