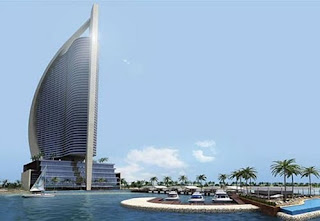 Alaska's most prolific expat fraudster, Gary James Lundgren, whose long career as a white-collar criminal has left a line of angry victims*, that could probably reach across the United States, is not done yet. His latest scam: seeking to obtain sufficient funds, from the wealthy condominium owners at the Trump Ocean Club, in the Republic of Panama, to be able to acquire the distressed hotel property on the site, without any financial expenditure on his own behalf.

Lundgren, having successfully removed Donald Trump's management team from the condominium tower, replacing it with one owned by Gary's wife, Griselda Perez, and being responsible for Roger Khafif's departure from Newland International Properties Corp, as CEO, he now is looking to take over the hotel itself.  Remember, Donald Trump has a pending action against Lundgren, for $75m, filed with the International Chamber of Commerce, in Europe, alleging that his company's removal was an illegal act.
Some old Panama hands suspect that his ultimate aim is to use the hotel, and later the in-house casino, to launder drug profits for his longtime Colombian narco-clients, a task that may become more difficult within Panama's notoriously nearsighted banks, due to the fallout from the Panama Papers. Lundgren now has a small army of bodyguards protecting him, largely due his inability to pay off on his high yield investments, which are little more than a Ponzi scheme, since Panama's attractiveness for "flight capital" has waned of late.

He obviously needs a new source of cash, to pay his "investors," hence his move against the hotel. His lifetime ban on securities trading, due to the FINRA ruling, has hampered his ability to trade securities for US clients, though he still is engaged in selling investments to them, which constitute securities under Federal securities laws, but he needs a new cash cow badly, according to eyewitnesses in Panama.