BUNTAIN AND LAMB, WHILE OFFICERS AT DUNDEE BANK, STOLE $95m IN CLIENT SECURITIES, AND MOVED THEM TO THE BAHAMAS 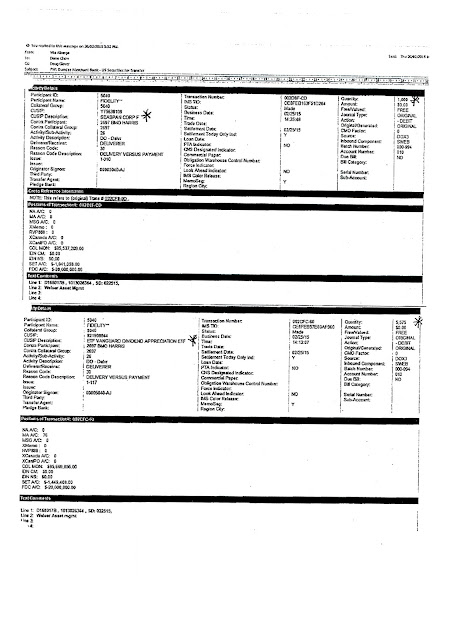 Some of Sharon Lamb's comments, made on the Internet, allege that the amount of money the victims have lost, as the result of her plundering of Dundee Bank client assets, can't be more than a couple of million dollars, in cash and securities, as the bank, where Lamb and President Derek Buntain, never had large amounts of stock, or large cash balances. Do not believe this disinformation. The losses to fraud may be the highest ever recorded in Grand Cayman, by the victims of these Cayman Islands financial criminals, who are known as the Cayman Gang of Four; they are Derek Buntain, Sharon Lexa Lamb. Ryan Bateman, and Fernando "Motto" Mendes; They are Cayman's master organized crime crew.


The original estimate of victim losses, rendered a year ago, by the Cayman islands Monetary Authority (CIMA), was USD$450m-500m. Above you will see a transfer, of registered securities, valued at more than ninety-five million dollars, from Dundee Merchant Bank, to a broker-dealer in the Bahamas shown to be Weiser Asset Management, Ltd.; These were stolen securities. I would be very interested in knowing how Weiser's compliance officers approved the transaction.

At the time of these transfers, none of which were authorized by the registered owners of these securities, Sharon Lexa Lamb was the Senior Vice President, and Derek Buntain the president, respectfully, of Dundee Merchant Bank, which means they are both strictly liable to the account holders, as well as the bank itself. This is but a small sample of the hundreds of millions of dollars of losses the victims, Canadian pensioners and retirees, have suffered, at the hands of the Cayman Gang of Four, each and every one of them, liars, thieves and cheats. If they don't all end up in prison, they will just find other investors to steal from; Let justice be served.

Therefore, kindly disregard any disinformation you may see, where these thieves deny liability for their many egregious crimes, and delete any obvious reputation restoration trash that you find online.