Lawyers are required, under most codes of professional ethics, to zealously represent their clients, but sometimes they forget that they are, themselves, officers of the court, and engage in dilatory tactics, seeking to delay legal proceedings, especially when they know the evidence is against them, and their clients will ultimately face a harsh justice. Many members of the judiciary consider these tactics to be bad faith conduct, which can result in serious penalties, both for the client, and more often, for the lawyers as well.

Regular readers of this blog know that we are following the events of the Cayman Gang of Four scandal, which involves the theft of hundreds of millions of dollars, owned by Canadian pensioners and retirees. A civil suit is presently pending, in Grand Court of the Cayman Islands, against Dundee Merchant Bank, the custodian of the funds, and one of its former officers, Sharon Lexa Lamb. Counsel for the plaintiff is seeking evidence, to be used in that case, to prove up liability, and damages.

A suit, brought several months ago, by the plaintiff, Lawrence Heath, against Leon Frazer & Associates, Inc., is solely seeking account documents of the plaintiff, a former investment client of the defendant wealth management firm, in its possession. The plaintiff was forced to file the suit, after the defendant, by and through its attorneys, failed to produce its client files, after months of delay; Here's why. 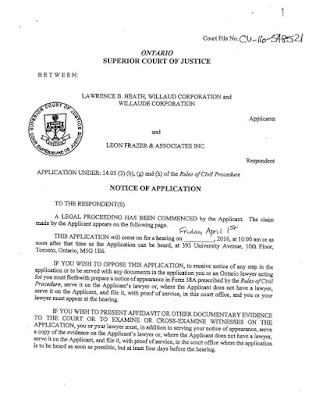 First, defendant's compliance officer stated, in writing, that there were several boxes of client files and documents, and that she would produce them, in the ordinary course of business. Then, suddenly, the compliance officer is replaced by another, who immediately claims that there are no such extensive records, and who only produces a small, obviously inadequate, set of documents, and takes an adversarial posture with the request.

Bad faith, in the course of litigation, occurs when multiple events, when taken together, demonstrate a deliberate intent to ignore the reasonable requests of opposing counsel, to move the cause forward, and a blatant disregard for the rules of civil procedure. These specific acts leave no doubt in my mind that the defendant, acting through his counsel, has engaged in a course of conduct designed to delay the proceedings indefinitely, with the ultimate aim that they take so long that the plaintiff, or major witnesses, pass away, or become too ill and infirm to testify at trial. Sources close to the plaintiff report that the stress of the delays in this case have had an effect upon his health, and they believe that they have shortened his life; he is 90 years old.

Any one of these acts, all of which have occurred in the case, is sufficient, in my book, to constitute dilatory practice; all of them together constitute bad faith:

(1) the defendant corporation has failed to timely file an answer or response, on the merits, to the Notice of Application. The plaintiff can now, at any time, seek an Order of Default against the defendant. What lawyer or law firm does that, if not to delay the proceedings ?

(2) Back in August, two attorneys representing the defendant advised that they were going on vacation for two weeks, and would address the issues upon their return, notwithstanding that a third attorney has been solely handling the defense. Does this sound like dilatory practice to you ?

(3) Also, back in August, defense counsel indicated that they were opposing the Application, and were going to file a motion. Counsel asked for, and received a half-day appointment, in November, to have the Master hear the motion. No motion, or any other pleading, other than a notice of hearing, has ever been filed with the Court, notwithstanding counsel's promise to file it. Two months later, with no motion, we must deduce that securing the hearing was a bad faith effort to delay the proceedings for months, as was the claim that it would take a half-day to settle a controversy that could be resolved by the Court in fifteen minutes. The Master request was merely a ploy.

(4) Last week, it was reported that the defendant, who has twice refused to allow its director, William Tynkaluk, to appear and give sworn testimony, was again objecting to Tynkaluk appearing, but would forward a proposal to opposing counsel, to schedule the testimony of a number of witnesses for both sides, and move the case forward. Defense counsel has not, despite repeated requests, ever delivered a proposal to settle discovery issues. They do not want their director to testify, though he was the personal investment adviser of the plaintiff at LF; they allege his advanced age precludes his appearance, but Tynkaluk was recently staying at a major Canadian resort, which frankly calls into question his infirmities.

Tynkaluk has repeatedly been summoned before the Ontario Securities Commission, to explain allegations made against him, involving insider trading of Leon Frazer stock, in advance of the sale of the company's stock, with nonpublic information. he actually repeatedly solicited the plaintiff, to trade on inside information, given to him by Tynkaluk, but the plaintiff, a retired attorney, declined. Is this what Leon Frazer counsel is afraid may come out during Tynkaluk's testimony ?

I would like the lawyers reading this story to decide whether concerning the conduct of the defense of this case, which is solely seeking documents, and not demanding damages, what you would do, if opposing counsel carried on what can only be interpreted as a deliberate campaign of bad faith practice, as you see here, and since attorneys are bound to follows the orders of their clients, one must ask whether Leon Frazer & Associates, Inc., or its parent, IA, have instructed these attorneys to pursue what must be regarded as an improper defense of a valid Application. I wonder what the opinion of the the Law Society of Upper Canada would be, given this set of facts ?