VENEZUELA PUSHES ITS NEIGHBOR, BUT IS IT RAISING ITS OWN COUNTRY RISK INSTEAD ? 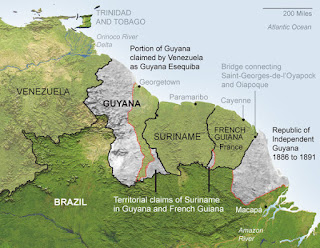 Last month, the Bolivarian Republic of Venezuela reasserted an old territorial claim against a large portion of the Cooperative Republic of Guyana, its neighbor to the east. This dispute, which was settled by an international tribunal in 1899, has been revived by the Maduro regime, most likely to distract Venezuelans from the economic free fall its socialist government has brought about. Dictators frequently use bogus foreign policy disputes to divert their population from the real issues at hand. The question is, will Maduro's actions against Guyana backfire, and drive Venezuela further into economic chaos? There could be serious push back from outside economic forces, if Venezuela makes a move against what it calls its "Reclamation Zone."

If you are a regular reader of this blog, you will recall that Venezuela seized and American oil exploration vessel, in Guyanese waters, a while back, claiming that it was poaching in Venezuelan territory. Now Venezuela's strongman has served notice of his intention to claim not just a large portion of Guyana's EEZ, but all its territory west of the River Essequibo. The claim, which has no legal basis, if asserted by a desperate Maduro, anxious to hold on to the presidency, in the face of domestic economic ruin, could further damage Venezuela. 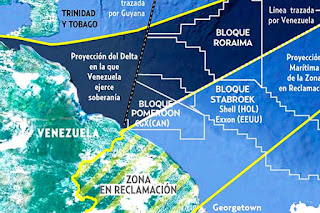 Any further military action in the oil-rich waters belonging to Guyana could frighten the global petroleum industry, to the point where it reconsiders any new projects in Venezuela, as well as scare the world's lending banks, as well as firms engaged in international trade with Venezuela. The fallout from any preemptive Venezuelan action could further damage the country's economy.

Doesn't Venezuela have enough of the world's oil reserves ? It surely does not need to be manufacturing a previously-settled territorial claim, like Nazi Germany, to take territory that it is not its to take. The fallout could be lethal, Sr. Maduro, so try not to act like Adolph Hitler, lest the global response further pushed Venezuela into the toilet. Country Risk could reach unacceptable levels, and result in total capital flight. 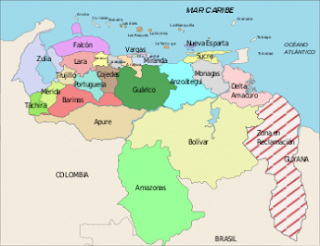