Gabriel Btesh, the Panamanian businessman who hastily relocated to the Middle East after he, and several of his associates, became the targets of an investigation by the country's Anti-Corruption Prosecutor, may not taking advantage of his new home for long. You will recall that he is busy moving his family out of Panama, a clear indication that he will not be coming back, but he may find himself back in Panama nevertheless, or in the United States, for criminal prosecution. His reputed narcotics involvement was responsible for the loss of his US visa, years ago.

(1) The authorities in his present domicile have reportedly stated that they not only do not want him as a permanent fixture, but that if they had advance notice of his activities in Panama, he would not have been welcomed. He cannot be extradited, true, in his present location, but as you know, he may be compelled to leave.

(2) Some of his former "partners" in Panama, upset at his unannounced departure, have allegedly made plans to have him brought back to Panama. It appears that bounty hunters may be in for some new business. Btesh has full-time armed security, but he has made some major enemies in Panama.

(3) Btesh, whose close relationship with convicted Pyramid/Ponzi schemer, David Murcia, resulted in his receiving not only a carload of Murcia's smuggled bulk drug cash, but several Murcia real estate holdings in Panama as well, has been implicated in most of the major corruption scandals that have rocked Panama. Does he really think he will escape justice, as one of the biggest players ? Murcia is obviously cooperating with American authorities; he was removed from a Federal Prison, where he was serving a long sentence. Murcia's testimony could place Btesh in prison for the rest of his life.

Btesh, in the dock in Panama, could implicate many of Martinelli's Cabinet, including some who have heretofore escaped prosecution. Will it come to pass ? 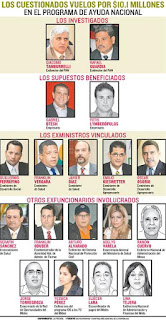