Investigators looking into several areas where portions of Panamanian government funds, earmarked for major projects, were siphoned off, for the benefits of several of the country's senior PEPs, including members of the judiciary, have learned that Financial Pacific, heretofore the operator the Petaquilla Mining insider trading scam, was also deeply involved in other illegal acts. 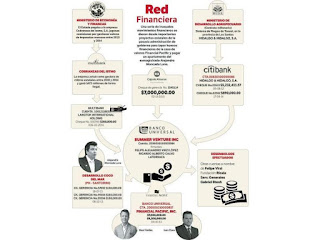 This diagram, which was created by La Estrella, one of Panama's leading newspapers*, and based upon information made available, confirms the central role played by Financial Pacific, in the payment of millions of dollars in illegal kickbacks to Panamanian PEPs, by the Ecuadorian contractor, Hidalgo & Hidalgo SA. If every major government project involved bribes & kickbacks, it will take several years to unravel all the details, and it is believed that even those government officials currently holding office,  and who have ostensibly embarked upon a reform crusade, will also be implicated, all the way up to the country's sitting president. Many fear that only the most visible offenders will be exposed, and charged, and that the underlying systemic corruption will survive.

For those who have an interest, the Petaquilla case continues to develop outside of Panama. A large number of unlicensed securities dealers, bloggers, Panamanian businessmen, and others who were privy to the inside information on Petaquilla Mine, took illegal advantage of that knowledge, to the detriment of innocent investors, who flocked to purchase the stock. US, Canadian and EU securities regulators are investigating the case, as many of their nationals lost millions in the scam.

Country Risk, due to the totality of the corruption being exposed, will be seriously affected. Whether the widespread scandals will drive off critical foreign investment cannot be determined at this time, but if that is the net result, then Panama's attraction as an offshore financial center could decline, as the safety and viability of invested capital will be questioned. That will leave only those investors with dirty money moving into the economy, and that is disturbing, for Panama's efforts to be removed from the "Grey List" of uncooperative jurisdictions will fail.
________________________________________________________________________
* Adelita Coriat, one of La Estrella's investigative reporters, has covered many of the scandals in depth. If you require additional details, it is suggested that you review her recent articles.
Posted by Kenneth Rijock at Wednesday, June 03, 2015