CORRUPTION WITHOUT LIMITS DURING MARTINELLI ADMINISTRATION 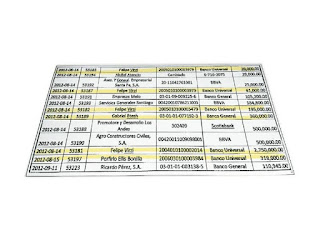 Look at the above table, constructed by one of Panama's leading investigative reporters; it details millions of dollars in kickbacks, paid out to corrupt Panamanian PEPs, in only one construction contract initiated during Ricardo Martinelli's administration. Gabriel Btesh and Felipe Virsi, two of Martinelli's closest associates, received huge sums, and I stress that this is but one matter. The kickbacks, which reportedly came from an Ecuadorian contractor, Hidalgo & Hidalgo, and appears to come to $5.2m, out of a $37.2m project.

Literally, billions of dollars was diverted, embezzled, stolen outright, and taken, from the assets of the Republic of Panama, during Martinelli's corrupt reign. The extent of the rampant corruption may never be known, but the anti-corruption prosecutors in Panama are continuing to expose its depth and breadth.
Posted by Kenneth Rijock at Monday, June 01, 2015