If you do not yet have a sense of just how corrupt Panama's former Superintendent of Banking, Alberto Diamond R was, while in office, what is now surfacing, since he fled Panama, ahead of the Anti-Corruption Prosecutor, should convince you. Victims are now coming forward; some them are licensed attorneys in Panama City; others are business owners working in Panama.

The gist of their complaints: they all had existing bank accounts summarily closed, on the orders of Superintendent Diamond, for no legitimate reason. When they contacted Diamond to correct the situation, they were told that they would have to pay a large bribe to him, between ($10,000-50,000), if they wanted to have their accounts reopened.

Some victims flatly refused, and as the consequence, are now forced to maintain their business accounts outside the Republic of Panama. Others have left Panama in disgust. Still others have mysteriously has their business licenses revoked, and were forced to close up.

If the Government of Panama does not now find this loathsome criminal,  extradite him, try and convict him, and send him to El Renacer Prison for the rest of his life, then the so-called reform program has failed  the people. The victims deserve no less. 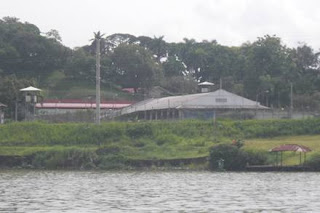