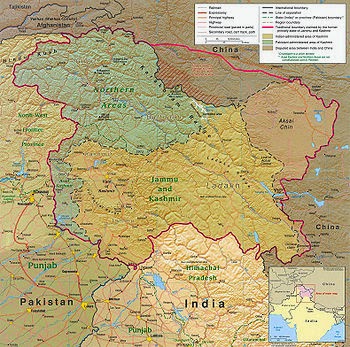 A number of recent events, all involving the disputed territory of Kashmir, all appear to be potentially creating a Perfect Storm that may result in armed conflict involving India. Any major military action will have a significant effect on the Indian economy, on foreign investment there, and on the risk levels associated with financial exposure of Western banks, and of their clients.

Here's why I am concerned:

(1) Both India and China have sent approximately 150,000 troops to the contested border between Indian-administered Kashmir, and China.

(2) There has been new movement of Chinese soldiers into the Chumar area of Ladakh, which is Indian territory.

(3) With elections coming this fall, the Indian Government could be posturing for its domestic audience.

(4) Bilawal Bhutto Zardari, a rising politician g in Pakistan, which claims all of Kashmir, has stated that he intends for his country to take control of the entire region. Being that he is the son and grandson of  Pakistani Prime Ministers, he  may very well end up as the country's principal leader, and his extremist nationalistic attitudes could force India into yet another war in South Asia.

The status of  Kashmir, which had a Muslim majority at the time of partition, in 1947, was intended to be solved by a plebiscite, which was never held. Proponents of independence for Kashmir further complicate the tug of war between India & Pakistan, and increase risk.

I fear that one or more of these new factors could result in a limited military action, which may spin out of control, and draw India into armed conflict , once again,with either Pakistan or China. It is suggested that you raise Country risk for India, until after the elections, for until that time there is a clear and present danger of an incident, which could spark a major military response on India's part.
Posted by Kenneth Rijock at Saturday, September 20, 2014