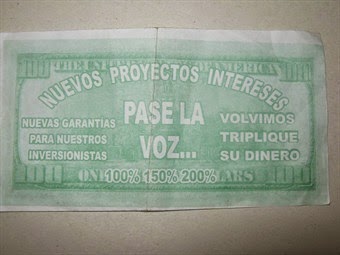 Two Colombian nationals, claiming to be relatives of master pyramid/Ponzi schemer David Helmut Murcia Guzmán, are trading on his reputation to perpetrate a new scam, which promises investors that they will triple their money immediately, and receive interest payments of up to 200%. Calling themselves Álvaro Murcia and Alejandra Guzmán, the fraudsters have circulated a leaflet ( pictured above) that promises unbelievable returns forthwith, meaning literally the same day.

Many Colombians still revere Murcia, whose company, DMG, initially made money for Colombians who invested; Of course, in classic Ponzi scheme style, it was paying old investors with money taken in from the newer victims, but he has acquired a stellar reputation in the country, notwithstanding his subsequent exposure, multiple convictions, and imprisonment. Murcia's picture reportedly appears on the leaflet, which, like Murcia's own DMG fliers, appears to be a US $100 note.

Victims, who were promises same-day payment, have already begun to surface, as well as government warnings, to the public, against investing in the scam. The Government of Colombia has advised that it is attempting to collect the leaflets, and arrest the perpetrators; it has stated that it will not be liable for losses.

Murcia, who was sentenced to a long term in Federal Prison in the United States, is said to be cooperating with American law enforcement agents; he has been seen outside of prison, and there are many Panama observers that believe he is in some sort of Witness Protection (WitSec ?) program. I wonder how he would feel if he knew that others are invoking his legacy to defraud investors in his native Colombia.
Posted by Kenneth Rijock at Wednesday, September 03, 2014