WILL GRENADA SACK ITS CBI HEAD FOR MISCONDUCT AND CORRUPTION ? 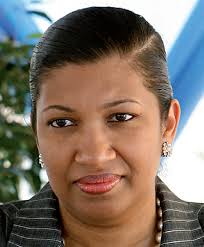 In addition to the information contained in yesterday's article, Grenada's Prime Minister tried to have our Article Exposing Million Dollar Diplomatic Passport Fee taken down, there are a number of other acts of misconduct or corruption, attributed to CBI Head Kaisha Ince, which, when taken together, justify her immediate removal for cause. Confirmation of these conversations can be easily obtained, through either the telephone utility, or Ms. Ince's telephone itself.

These are some of the grounds, which have surfaced of late, together with verbatim statements she made, via text message, with either the country's Prime Minister, or a close personal friend of Ince. You are warned that some of these conversations may be disturbing, vulgar or crude, but the offensive language needs to be seen. It appears that they are reluctant to discuss personal issues on the telephone; one conversation included a query regarding whether a voice telephone call was appropriate ("PM can I call you ?").

(1) There is a ongoing intimate affair between the Prime Minister, Keith Mitchell, a married man, and CBI Head Kaisha Ince:

Ince:  "Ha ha, that's what we are going to call it 'Meeting ?'
I was thinking Tuesday, let's do
You'll have free house".

PM:  "Yes, dinner at mine ?
I like the sound of that
Will there be my special dessert ?"

(2) Ms. Ince, who is of East Indian origin, originally from Trinidad, is prejudiced against Black Grenadians. This is a conversation between Ince and a friend: WARNING- DISTURBING.

Ince:  "Just lot of work, and they're not professional."

Friend: "Yep, I know that - local workforce got bad attitude."

Ince: "Damn, surrounded by them "!

Friend:  "Why do a black man drive with his windows up ?
They think the smell is coming from outside.
That'll cheer you up [Emoticon]."

Friend: "What are the three things you can't give a black person ?
A black eye, a fat lip, and an education."

(3) Grenadians also have two unanswered questions about their CBI chief:
(A) Is it true that her daughter's British education is being paid by Henley & Partners ?
(B) Is the reason Ince is retaining outside professionals for the CBI agency, kickbacks she receives ?

Will Grenada terminate Kaisha Ince as CBI Head,. given the seriousness of the above violations ? We cannot say, but we shall continue to cover the issues.