SHOULD YOU INCREASE COUNTRY RISK FOR LEBANON, AGAIN ?

Tomorrow, Israel will swear in its newest Defense Minister, Avigdor Lieberman, a hardliner whose appointment disturbs many Middle East observers, who fear a new conflict, in 2016, between Hezbollah and Israel. Last year, Lieberman has predicted that another war in Lebanon was inevitable, given Hezbollah's increased assertive nature, its need to rebuild its image in the Arab world, due to its Syrian intervention on behalf of Assad*, and its fiery anti-Israeli rhetoric.

Add that to a statement that Lieberman once said about how, in a future war, started by its enemies, Israel should bomb the opposing country's banking centers. Think about how this would then play out in Downtown Beirut's financial district. If it was destroyed, along with Lebanese infrastructure,  which was another recent threat leveled at it by a retired Israeli general, the economy would crash and burn, and repayment of foreign obligations, indeed ordinary banking itself, would be impossible for a substantial period of time.

Finally, Hezbollah's recent boasting, about the construction of military tunnels, into Israel, from southern Lebanon, increases the risk that new armed conflict could occur, based upon something as minor as an attempt at kidnapping Israeli soldiers again, and taking them  through the tunnels, into Hezbollah-controlled territory.

The bottom line is that there is a clear and present threat of war on the Lebanese-Israel frontier this year, and compliance officers whose clients trade with Lebanese companies, or have financial exposure there, should prudently seek to minimize the exposure of their bank, and their clients.
________________________________________________________________________
* Another potentially aggravating issue to consider is Israel's recent declaration that, in any future settlement of the Syrian question, it will not relinquish the Golan Heights. Under international law, the Golan, which was taken in a war of self-defense, is legally Israeli territory. Historically, it was part of ancient, biblical Israel, as proven by recent archeological digs, which have turned up synagogues, and other evidence of biblical Hebrew inhabitants. 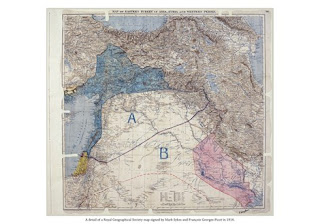 Furthermore, under the 1916 Sykes-Picot Agreement, it was originally part of the League of Nations Mandate of Palestine, but it was improperly traded away by the British, in exchange for the oil field region around Mosul. Technically, it is part of the National Jewish Homeland awarded by the San Remo Treaty, and ratified by the United Nations after 1945; Israel has the superior claim.