The Department of Justice wins the vast majority of money laundering prosecutions brought in US District Court for the simple reasons that the preceding investigations, which often takes several years, generally result in the acquisition of a large body of incriminating evidence, which is more than sufficient to convict the defendant. That's why you rarely read an article about a judgment of acquittal in a money laundering case.

You do finally need that evidence, through, at trial, and we shall now discuss a recent case, where the failure to timely obtain the same timely had fatal consequences for prosecution of money laundering charges. I will omit any details, which would allow you to ascertain the court or parties involved, lest it embarrass the prosecutors, or agents. involved, or defame the defendant, who does enjoy the presumption of innocence, notwithstanding the allegations, especially since he was not convicted.

The defendant, a national of a Latin American country, was charged with laundering the proceeds of narcotics transactions, through bank accounts located in some of the world's most prominent offshore financial centers, disguised as legitimate international business transactions. Though he had a US apartment, he was not a permanent resident, nor were there sufficient contacts for the Court, which ordered him held without bond, in pretrial detention. Apparently the fact that he had lived & worked in the US previously, including a period with a forensic accounting firm, was insufficient. His history of conducting international financial transactions probably also made him a flight risk, as did his dual citizenship in a country located in the European Union. 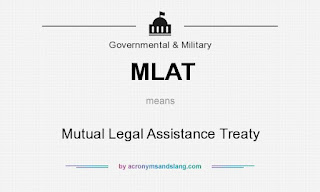 The US Attorney's office sought to secure the evidence, foreign banks records, mainly in tax haven jurisdictions, through multiple Mutual Legal Assistance Treaty (MLAT) requests, but they were not forthcoming after several months, and as the case came closer to the trial date, the Government asked for a trial setting in the following year, though it could not assure the Court that even then would the evidence be in its hands. Obtaining evidence from a foreign source can be difficult, and can be impossible, when facing s Speedy Trial demand.

The case was then transferred, due to improper venue, and rather than go to trial and lose, the Government came to a curious settlement with the defendant. He was charged with an immigration offense, which occurred years earlier, and all the original counts in the indictment were dismissed. we call this a plea of convenience, but the Government was certainly unhappy with the result.

The sentence was time served, which amounted to more than seven months in pretrial confinement, and Supervised Release was waived, meaning that was free to leave the United States. Of course, the Federal felony insured that he would not be coming back into the US, unless some government agency gave him permission. Thus, barring his subsequent cooperation with law enforcement, which was doubtful, given his experience in this case, he would not be visiting anytime soon. Of course, inasmuch as he was not facing a 20-year money laundering sentence, he was most likely relieved.

Was justice denied, for the lack of evidence in hand, or was there insufficient evidence to convict, had it been produced ? We cannot say, but we trust that a lesson was learned here; don't bring money laundering charges in Federal Court, expecting to acquire the evidence at a late date; you may not get it.

Without the evidence, the court file alone makes it impossible for us to determine his guilt or innocence.