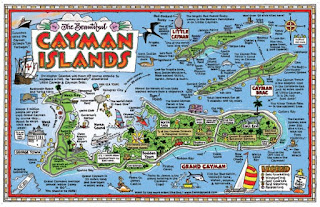 Last August, when the news broke about the $450m financial theft in the Cayman Islands, where the individuals now known as the Cayman Gang of Four stole the accounts of Canadian & American retirees and pensioners,  we then asked this question: Should we raise Country Risk for the Cayman Islands ?

Six months later, having seen a total lack of governmental response to one of the largest scandals in Cayman Islands history, we are forced to answer in the affirmative. Here are just some of the reasons for this assessment:

(1) The hands-off policy of the Cayman islands Monetary Authority, CIMA, has been utterly disgraceful. CIMA has not only improperly alleged that it has no jurisdiction, it has obstructed and impeded the investigation of the case by foreign regulatory agencies. The fact that a B Class bank, and an exempt corporation (without the required licensed professional) masqueraded, in writing, as a bank, are involved in criminal activity, and CIMA has ignored its statutory responsibilities, greatly contributes to our decision to elevate Country Risk to high levels.

(2) A careful review of prior financial scandals reveals that neither CIMA, nor government prosecutors, caused felony criminal charges to be filed upon Cayman residents who guilt was obvious, beyond a reasonable doubt. The primary goal in the Cayman Islands appears to be the protection of the status quo, to the damage and detriment of victims, who just happen to be foreigners, for they will lose.

(3) Corruption is also a factor. there have been a number of messy cases, involving official governmental corruption, or corruption at non-profits, or non-governmental organizations.  Apparently, there is little or no fear, on the part of Caymanians, of arrest and prosecution for corruption. The local players in the disgusting FIFA scandal have opened the eyes of the global financial community to NGO corruption, and it was surprised to find some of the biggest offenders were from Grand Cayman.

Whether the raising of Country Risk will subsequently deter foreign investors, cause some of the 600+ hedge funds to relocate, or attract unwanted attention from the Financial Action Task Force (FATF), is not known at this time, but it will certainly cause some to take a hard look at whether the risks warrant looking elsewhere for an offshore financial center.