The Financial Industry Regulatory Authority has, in an 11-page ruling, permanently barred Gary James Lundgren, the Alaskan native living in the Republic of Panama, "from acting as a broker or otherwise associating with firms that sell securities to the public." Lundgren repeatedly failed to provide any information, documents, or bank account records, notwithstanding five requests from FINRA, over a period of several months, in violation of his obligations to provide the same to regulators upon demand.

During a FINRA investigation, initiated after this blog, and Wanted SA, published a number of articles detailing his criminal activities, Lundgren, and his Panamanian attorney, Alcides Peña, conducted a dilatory campaign, designed solely to delay the proceedings. Those articles spawned death threats against the authors and publishers, as well as bogus civil & criminal proceedings, which have lingered for years in Panamanian courts, due to reputed bribes, paid by Attorney Peña, to members of the judiciary, government attorneys, and court staff.

First, they alleged that there were far too many documents to produce; then, they asserted that they did not possess the documents. later, they asserted third-party privilege barred production. Finally, they claimed that the US Constitution, and Panamanian law, protected Lindgren's right not to disclose the material. All these defenses were found by FINRA to be without a legal or factual basis. Lundgren, in a final, desperate act, claimed that FINRA staff, in its Florida office, conspired with the journalists, in a vendetta against him. FINRA dismissed the defenses, on the merits, and ruled that the failure to provide information warranted suspension, and ultimately, a total bar upon any securities activity for Lundgren.

Many Panamanians revile Gary Lundgren, both for perpetrating bearer share fraud upon Canadian & American expats who settled in Panama, and for laundering Ponzi scheme and narcotics profits of the convicted Colombian fraudster, David Murcia Guzmán. Lundgren has repeatedly claimed to be partners with the fugitive former president of Panama, Ricardo Martinelli. He is currently being sued for damages, by Donald Trump, in connection with his mismanagement of the association responsible for the Trump Resort in Panama. He is believed to be under investigation by two US law enforcement agencies.

Readers who wish to review the complete text of the FINRA decision can email me at miamicompliance@gmail.com , and I will send you the decision, in pdf format. 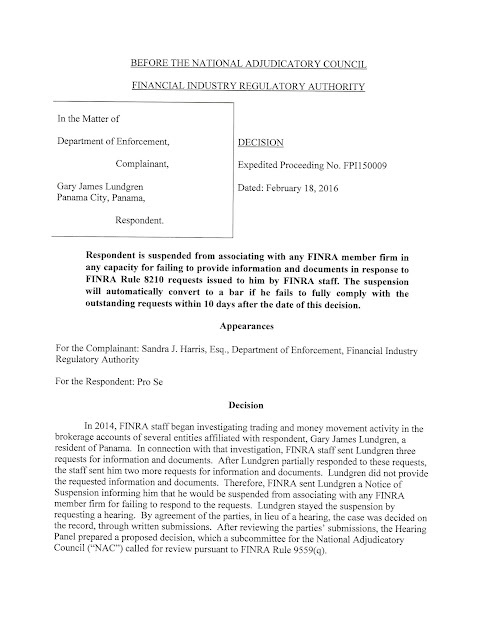 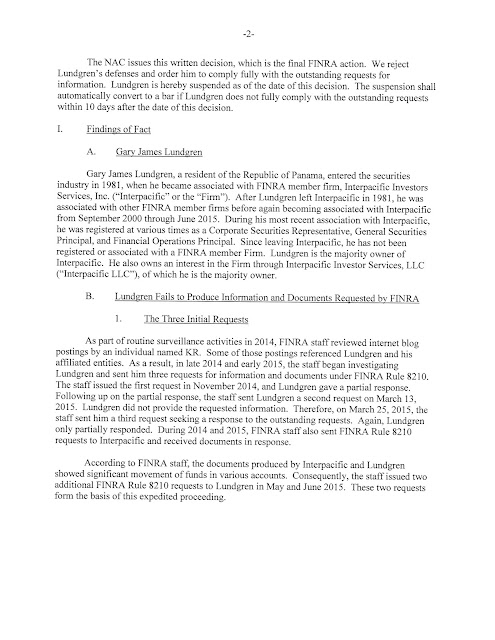 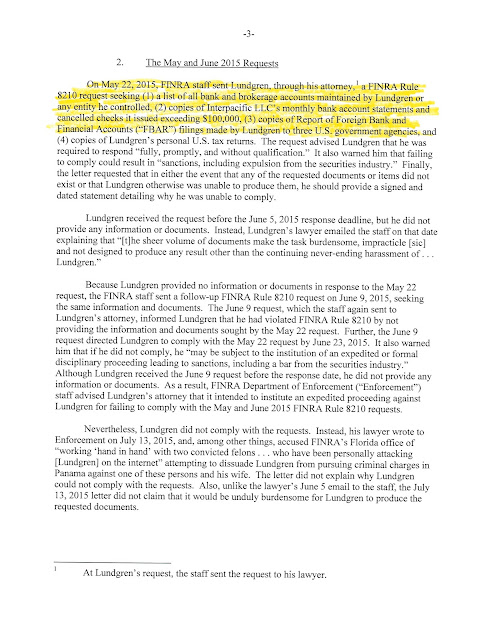 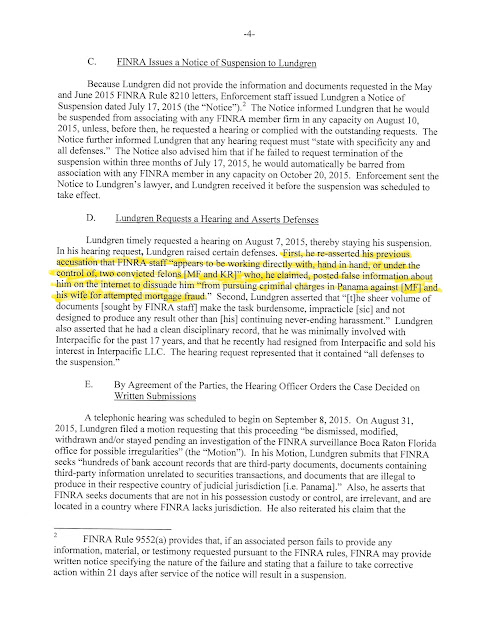